What is Bone Densitometry (DXA)?

Bone density testing is used to assess the strength of the bones and the probability of fracture in persons at risk for osteoporosis. The test, referred to as bone densitometry or bone mineral density scan (BMD), is a simple, noninvasive procedure that takes just minutes.

Unlike a bone scan, bone densitometry testing does not involve the administration of radioactive contrast material into the bloodstream. The most commonly used test is known as a dual energy x-ray absorptiometry (DXA) scan, and it can be performed with devices that measure bone density in the hip and spine, or smaller peripheral devices to measure bone density in the wrist, heel, or finger. The central bone density device is used in hospitals and medical offices, while the smaller peripheral device is available in some drugstores and in screening sites in the community. The DXA scan involves a much smaller radiation exposure than a standard chest x-ray.

In premenopausal women, estrogen produced in the body maintains bone density. Following the onset of menopause, bone loss increases each year and can result in a total loss of 25%-30% of bone density in the first five to ten years after menopause. Your doctor can help you decide when and if you need a bone density test.

In general, this testing is recommended for women 65 and older along with younger post-menopausal women who have further risk factors for osteoporosis, including:

Your bone density measurement will be compared to the average peak bone density of young adults of the same sex and race. The results are usually reported as a "T-score" and a "Z-score." The T-score compares your bone density with that of healthy young women, while the Z-score is a comparison of your bone density with that of other people of the same age, gender, and race. In either the T-score or Z-score, a negative number means you have thinner bones than the standard. The more negative the number, the greater the degree of bone loss. Osteopenia, or low bone mass, is defined as the beginning of bone loss and corresponds to a T-score between -1.0 and -2.5. A T-score of -2.5 or lower is indicative of osteoporosis. 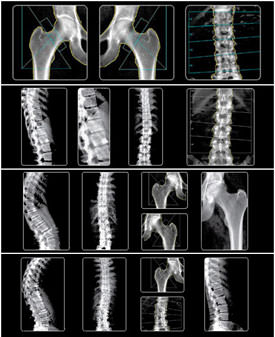