WHAT IS AN MRI?

An MRI (or magnetic resonance imaging) scan is a radiology technique that uses magnetism, radio waves, and a computer to produce images of body structures. The MRI scanner is a tube surrounded by a giant circular magnet. The patient is placed on a moveable bed that is inserted into the magnet. The magnet creates a strong magnetic field that aligns the protons of hydrogen atoms, which are then exposed to a beam of radio waves. This spins the various protons of the body, and they produce a faint signal that is detected by the receiver portion of the MRI scanner. The receiver information is processed by a computer, and an image is produced. The image and resolution produced by MRI is quite detailed and can detect tiny changes of structures within the body. For some procedures, contrast agents, such as gadolinium, are used to increase the accuracy of the images.

Unlike many other imaging techniques such as computed tomography (CT), MRI does not expose patients to ionizing radiation (X-rays). MRI also provides much more detailed images of the body than other imaging modalities. The improved contrast seen on MR images between diseased tissues and normal structures has made MRI the preferred imaging test for evaluation of the brain, spine, musculoskeletal system and for many abnormalities in the abdomen and pelvis.

TYPES OF MRI PERFORMED AT MMI 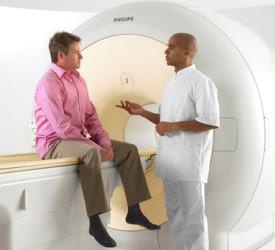