What is a Breast Biopsy?

A breast biopsy is performed to remove some cells—either surgically or through a less invasive procedure involving a hollow needle—from a suspicious area in the breast and examine them under a microscope. Image-guided needle biopsy is not designed to remove the entire lesion but to remove enough tissue in order to make a diagnosis. Image-guided biopsy is performed when the abnormal area in the breast is too small to be felt, making it difficult to locate the lesion by hand. There are times when your doctor may decide that an image-guided biopsy is appropriate even for a mass that can be felt.

A breast biopsy is a minimally invasive outpatient procedure which allows you to return to your normal activities within a few hours after the completion of the procedure. It is often recommended by a radiologist if any abnormalities are detected on your mammogram, ultrasound, MRI, or special mammography views. Your doctor may order a breast biopsy if an abnormality is detected on a physical exam. If a breast biopsy is indicated, there are different methods of obtaining the tissue sample. Two methods are by doing a ultrasound-guided core biopsy or an MRI-guided biopsy to ascertain whether a malignancy (cancer) is present. The preferred method is determined by which imaging the abnormality is best visualized, the size of the lesion, the location of the lesion in the breast, and the patient’s health status.

What is an Ultrasound-Guided Breast Biopsy?

An ultrasound-guided breast biopsy can be performed when a breast ultrasound shows an abnormality such as:

There are times when your doctor may decide that ultrasound guidance for biopsy is appropriate even for a mass that can be felt.

Here at MMI, we utilize ultrasound guidance in the following procedures:

You will be positioned lying face up on the examination table or turned slightly to the side. A local anesthetic will be injected into the breast to numb it. Using an ultrasound probe to visualize the location of the breast lump, the radiologist inserts a biopsy needle through the skin, advances it into the mass and removes tissue samples. If a surgical biopsy is being performed, ultrasound may be used to guide a wire directly into the mass to help the surgeon locate the area for excision. With continuous ultrasound imaging, the physician is able to view the biopsy needle or wire as it advances to the location of the lesion in real-time.

A small marker may be placed at the site so that it can be located in the future if necessary.

Once the biopsy is complete, pressure will be applied to stop any bleeding and the opening in the skin is covered with a dressing. No sutures are needed.

A mammogram may be performed to confirm that the marker is in the proper position.

This procedure is usually completed within an hour.

What is MRI-Guided Breast Biopsy?

When the breast lesion cannot be seen with mammography or ultrasound, and can only be seen using Magnetic Resonance Imaging (MRI), MRI is used to help guide the radiologist’s instruments to the site of the abnormal growth.

Using MRI guidance to calculate the position of the abnormal tissue and to verify the placement of the needle, the radiologist inserts the biopsy needle through the skin, advances it into the lesion and removes tissue samples. If a surgical biopsy is being performed, MRI may be used to guide a wire into the mass to help the surgeon locate the area for excision.

The choice of which type of breast biopsy to use will depend on each patient's situation, which modality the lesion is best seen, as well as their needs. Some of the factors to consider include how suspicious the lesion appears, how large it is, where in the breast it is located, the lesion type, how many lesions are present, other medical problems the patient may have, and personal preferences. Patients are encouraged to discuss the advantages and disadvantages of different biopsy types with their doctors.

What to expect when you need to have a breast biopsy:

When you arrive we will give you a detailed explanation specific to your procedure, and we will ask you to sign a consent form. You will be asked to change into a gown. Once you are in the proper position, your skin will be cleaned and numbed.

Frequently, after tissue samples have been removed, a tiny marker particle called a “clip” is left inside your breast to identify the biopsy site. If a “clip” is inserted into the biopsy site, a mammogram will be taken after the biopsy to document its placement.

When the biopsy is over, the technologist will hold pressure on the biopsy site for 10 minutes to stop any bleeding. The site will be dressed with gauze and surgical tape, and an ice pack will be placed on it to reduce swelling and bruising.

We then send the tissue sample to the pathologist who will issue a report to us and to your doctor, usually within 24 hours. 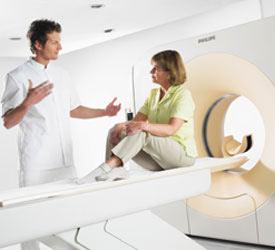